What is Amoebiasis Disease? Here are the Facts!

This is a protozoan disease with the causative agent being Entamoeba histolytica. Therefore, amoebiasis is an infection of large intestines. Precisely, it is a disease that can also be through faecal contamination.

Generally, there are a number of species for amoeba but can exist as parasites inside the human intestines though only one is known to cause a disease.

In addition, amoebiasis is a waterborne disease. You can contract it by consuming water or food that contains Amoebic cysts. It occurs mainly between young to middle-aged person.

More so, you can transmit amoebiasis from your hand to mouth, being in contact with surfaces or objects contaminated from an infected person. The parasites can alternate fruits and vegetables grown in areas where human faeces is used as fertilizers.

Firstly, it exists in tropical and subtropical countries where standard of public hygiene and sanitation is minimal.
Secondly, it is caused by a protozoa and is the main cause of diarrhoea travellers.
Thirdly, infections can also be spread by blood to the liver, brains and other organs.
The risk for amoebiasis infection is greatest for those who reside in rural areas, where they drink and eat in places of poor sanitation.
RELATED: Beware! This Will Infect You With Giardiasis!
However, the most problem caused is through eating and drinking contaminated food.
In existence, the parasite occurs in two forms :

Initially, the infection begins when you consume the cysts. The cyst will hatch into trophozoite then, they multiply into your intestinal lining thereby causing ulcer. The end result being diarrhoea.

However, we can transmit the cyst directly to another or indirectly through contamination of food or water.

The 4 Forms of Intestinal Amoebiasis 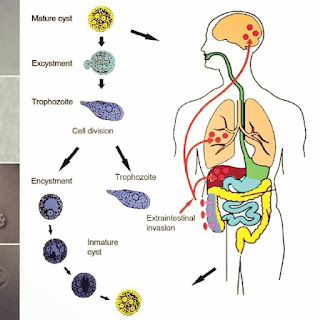 Trophozoite can sometimes remain in the intestine without causing any damage i.e. Asymptomatic carrier and 90% of the patients fall in this category.
However, only faecal analysis can show infection in asymptomatic carriers.
In this analysis, it may show cyst of non-pathogenic Entamoeba dispar or the potentially pathogenic Entamoeba histolytica which is not invasive.

RELATED: This is Why Malaria is a Communicable Disease.

Healthcare professionals sharply define the ulcerations as eroded undermine edges. We clinically express it as:

It presents by high fever in a severely ill patient. Intestinal bleeding or perforation of colon exist here.
Nevertheless, a slow seepage of intestinal content into the perineum is very likely in severe ill patients whose conditions deteriorate. This hence results into intestinal paralysis.

In 1% of the patients an inflammatory thickening of intestine wall occur.
Therefore, the diagnosis of this kind is by biopsy.

Further, when it moves to the liver, it may result into liver abscess. Problems that may be accompanied by the patient include: 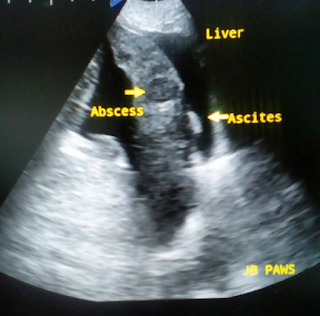 Moreover, one may complain of pain of upper right option of the abdomen that start gradually with frequent lose of watery bowel movements.

Symptoms appear gradually after two weeks. Sometimes there may be symptoms like fever, chills and diarrhoea that retains blood or mucus.
This is known as Amoebic dysentery.
This can result to complications like dehydration.

Treatment (Educational purposes only)
1.) Give ORS solution to dehydrated patients to compensate for the loss of bodily fluids.

2.) In Amoebic dysentery, give metronidazole 800 gms 3 times daily for 5 days:

3.) In the case of liver abscess you give:

Here are Stages of Disease Development

8 Ways of Promoting Nutrition in Your Community!

Revealed! These Are The Signs and Symptoms of Syphilis

What You Didn’t Know About Community Mobilisation?