Sewage Systems: How Do They Work?

Sewage is excreta plus water. Hygienic disposal of human waste is important because several pathogens leave your body through faeces or urine.

We get these diseases by eating food or drinking water that is contaminated with faecal matter (wastewater). Otherwise, we can get it directly by eating food with our dirty hands. We often refer this to as Oral-faecal route of transmission.

Waterborne sewage needs treatment before disposal. However, the principle of treatment is found in this dirty water, in a closed space for a few days to allow fluids and solids to separate and biological action (bacteria) to turn into a safe and usable form.

There are two types:- 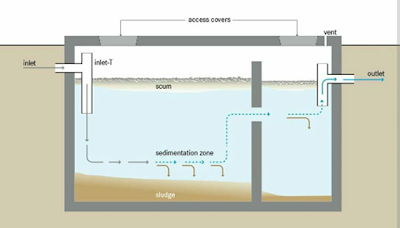 For example, sewage system for domestic use or in schools. The sewage drains into a concrete underground tank where solid matter settles to the floor and anaerobic bacteria digest it, producing a relatively small final semi-solid sludge and a clear liquid. This helps the tank remain operational for several years without emptying it.

Moreover, where larger systems are involved, sewage ponds or lagoons are in use and usually their placement is far from the buildings where the biological action takes place. The effluent will need further treatment before releasing it.

However, some towns use water bodies to treat large quantities of sewage but unfortunately, this method leads to water or marine pollution.

Summary of the Process

Sewage from the sewer system go straight to its treatment plant. In addition, there are structures known as Bar Screens that obstruct larger items e.g rags, sticks, polythene bags and many more. The bar screens are arranged either vertical or horizontal and are 3 inches wide. However, raking and cleaning of the bar screens is a regular task either manually or automatically. This is Preliminary treatment!

Grit chambers pick up the process whereby the particles (grit) that could not be captured by the bar screens can hereby be collected and removed.

This wastewater flows in chambers at a regulated velocity so as to allow deposition of sand, silt, broken glass and rocks. These actually can cause clogging or destroy the pumps.

RELATED TOPIC: How Cholera is Infectious And How to Manage It.

Afterwards, the sewage moves to the primary treatment stage. Here, there are primary classifiers/sedimentation tanks that work under the principle of settling velocity to allow settling of solids and skimming off of grease and oils.

At this stage, what we call effluent (partially treated sewage) is free of solids larger than 10 uM. More so, it has to be organic matter.

This process is mostly removal of dissolved and suspended matter in the sewage. More so, aeration basins supply oxygen to the microbes (bacteria and protozoa) through the water along with Returned Activated Sludge (RAS). This therefore, facilitates aerobic digestion to the mixed liquor. In other words, it is the breaking down of organic matter using excess oxygen.

From the aeration basins, the effluent along with much of the sludge goes to the settling tanks (secondary classifiers). We remove the sludge and we can either remove, treat and deposit or take back to add the population of microorganisms. i.e. as RAS.

Also, final removal of solids and biological matter is present here. Water moves on from the secondary classifiers to primary filters hence ending up in a disinfection process. At this stage, We remove 85% of the organic matter from the water and finally disinfect the effluent with either chlorine, biofilters, sand filters or Ultraviolet (UV) light.

Brief Facts on Air Pollution And Its Types

Quick Tips on Dealing with Poisons and Antidotes

Beware! This Will Infect You With Giardiasis!

Fire Safety in the Laboratory

How to Prevent and Control Bacillary Dysentery