KSHV is the virus that process Kaposis Sarcoma. It is the cancer of the blood vessels. It was first discovered by Moritz Kaposis and it’s common among HIV positive clients.

Actually, it’s less common in the US and northern Europe although it’s relatively present among bisexuals and the gay people.

While gay men are at a higher risk as compared to their heterosexual counterparts is unknown but it could be attributed to sexual behaviours like deep kissing, e.g. tounging the back of partner’s anus and use saliva as sexual lubricant.

Infection of the virus is thought to be long term and a healthy immune system will keep the virus in check.

Somehow, treatment of Kaposis sarcoma can be difficult due to the immunosuppressed state of many of the people affected.

KS usually a localised tumour that can either be removed surgically or irradiation e.g. Ganciclovir (an ARV) which minimizes the rate of the disease development in People Living With HIV/AIDS (PLWHA).

This together with other necessary ARV drugs can improve the person’s overall health and help treat Kaposis sarcoma. Therefore, this clearly shows why we need access to health services. We are entitled to it.

However, the doctor will recommend treatment based on your patient’s general health as well as on where the lesions are, how extensive they are and how many they are.

Outlook for KS depends on the form of the disease. About one-third of people with classic KS develop another cancer which can be fatal.

Drug test can be done to confirm the existence of KSHV.

To be sure that a lesion is caused by KS, the doctor will do a biopsy to take a small sample of tissue from the lesion and send it to the laboratory for analysis.

Many would wonder what kind of virus or infection it is. Actually, this virus is one of the 8 herpes viruses known to infect humans.
Basically, primary Varicella zoster virus (VZV) infection result into chickenpox which many at times clears within a week. However, you can manage this infection by using calamine lotion or by using a painkiller like paracetamol.

Complications of chickenpox include :-
Encephalitis and Pneumonia 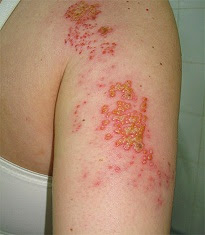 Once your clinical symptoms of chickenpox have cleared, Varicella zoster remains dormant in your nervous system i.e. the virus is latent.
Later in life, due to weak immunity, the virus is reactivates, producing a disease known as herpes zoster/ shingles.
Therefore, if you have sex with someone who has active Herpes zoster can either suffer from H. Zoster or chickenpox.

Safety Procedures in the Laboratory